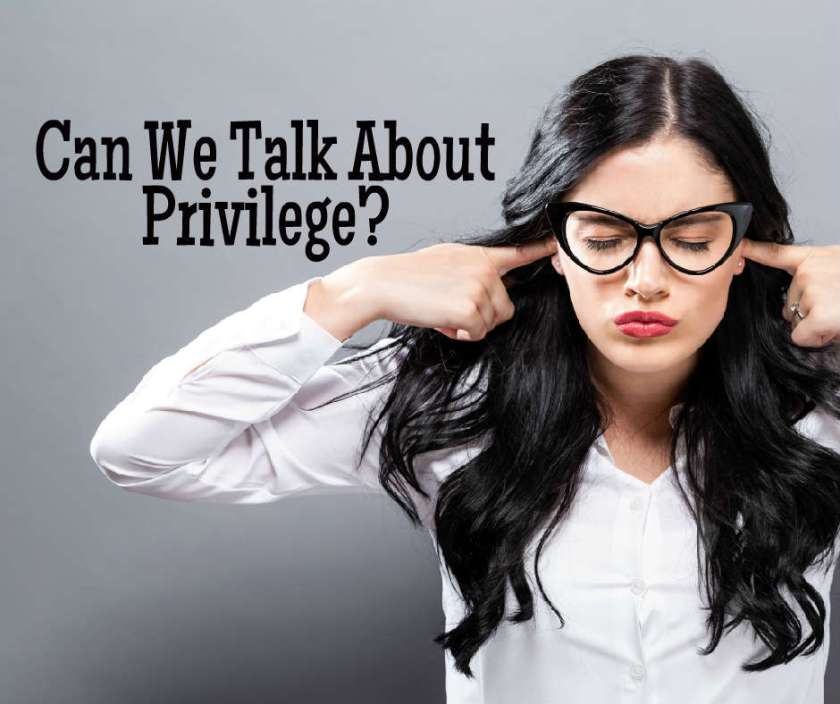 Open up any social media platform, and you’ll likely be confronted with entrenched opinions on the topic of privilege. Your Facebook feed will quickly tell you, not everyone agrees that white people, men, or any other social group has any special advantages or immunities over others. Granted, in many cases, it’s white people who deny the existence of white privilege and males who balk at the idea that men benefit from the way our cultural system is structured (usually quite angrily).

Surely Christians are different though, right? Surely they’ll take time to stop and really consider whether the system they’re a part of is contributing to the marginalization of others. Won’t they?

In a letter to the editor of the Moody Standard entitled “Rescinding the Term ‘White Privilege,’” Bryan Litfin, a professor of theology at Moody, proposed “five reasons why the term ‘white privilege’ isn’t appropriate for Christian discourse.”

I strongly suggest that if we as Christians allow ourselves to think that talking about privilege “isn’t appropriate for Christian discourse,” we’re going to find ourselves on the wrong side of this subject. Believe it or not, privilege may be one of the defining issues for the Church in the 21st century.

Can There Be ‘Underprivileged’ Without Privilege?

All my life I’ve heard the term “underprivileged.” It was used when we talked about people in impoverished countries or children who needed assistance with school lunches and winter coats. I’ve never heard anyone take exception to the term.

Part of the problem is that, if we’re going to imagine that there’s a “privileged” people, it’s easy to think it’s someone else—not us.

The Spectrum of Privilege

Where you land is typically outside of your control. That said, there are also systemic injustices that help maintain the spectrum as we know it. Some of the poorer countries suffer from civil unrest and terrible governments who oppress them. Some of the businesses and governments in more privileged countries take advantage of poorer nations by exploiting them and taking their resources.

So, while it might not be anyone’s fault where they are on the spectrum, it is the responsibility for justice-minded people on the more privileged end to do what they can to assist the people on the lower end and work to change the broken and corrupt systems that keep them there.

This spectrum dramatically changes when you go from an international scale to a national one. People on the lower end of the economic spectrum in America may find themselves higher on an international scale, but within their current context, there are still major challenges. It doesn’t help a mother of three struggling to make it in Detroit to tell them, “Buck up, you’re doing much better than the average mother in a developing country.”

Race, gender, sexual orientation, religion, social class, and disability have a great effect on the quality of life in America (or any country)—and to deny that just seems very misinformed.

‘Who Are You to Tell Me I’m Privileged?!’

One of the arguments I hear all of the time goes something like this, “How can I be privileged? I’ve worked so hard to get where I am. How dare you call me privileged!”

I’m a healthy, white, middle-class man, and I’ve had virtually no say in any of those factors. This doesn’t mean I haven’t had to work to succeed; it means that I haven’t had to work around many of the economic and sociological boundaries others have. Sure, there are many people of color who are more successful than I am, but by-and-large, all things being equal:

– I’m less likely to be arrested.

– I’m less like to go to prison if I am arrested.

– I’m more likely to get called back for a job.

The mythology that, no matter who you are, you can be whatever you want to be if you just work hard makes it difficult to have this discussion. Working hard matters, there’s no question about it. But this is by no means a level playing field, and by pretending that it is—or that all cultural barriers can be bypassed by simply working harder—we solidify issues of privilege.

Does Jesus Care About Privilege?

Christians, just like everyone else, are sinful and can take advantage of corrupt systems of power. Yes, there were Christians who fought for women’s suffrage, for Native Americans and against slavery, but there are also many Christians who have been on the wrong side of issues of privilege. It’s no wonder that there are people who puzzle over whether the Jesus of modern Christianity cares about the issue of privilege at all.

Not only did Jesus abandon the ultimate privilege to walk among us (Philippians 2:5-11), His concern for the underprivileged helped put Him in the crosshairs of the religious establishment. He spoke up for the poor, healed the sick of the racially underprivileged (even at times when it wasn’t religiously acceptable to do so—see Mark 3:1-6) and spoke up for and treated women like valued and important members of society. It’s obvious that the introduction of Christianity was intended to plant sociological seeds that would drive a stake into the heart of privilege.

What Do We Do About It?

Many of the problems we’re talking about are systemic. I didn’t choose them, and feeling guilty about it doesn’t do anyone any good.

The bigger question is, “What do we do about it?”

Once we recognize the issue of privilege, we’re responsible for our response. We can’t simply continue to soak up the benefits of privilege and deny they exist.

It’s not enough for me to just reject the idea of privilege. I might get a boost of moral superiority by saying “I reject my privileged status as a white male in America,” but it doesn’t change the fact that I’m going to still benefit from this systemic weaknesses in modern American society. So I have to do something else. I have to subvert the system—I have to leverage my privilege for the benefit of others.

In doing this, those with privilege need to be careful not to speak over those who have been marginalized. Instead of acting like we know what it is like to be black, female, gay, handicapped, Muslim or part of any other group we have not experienced from the inside—we need to step back and listen to and raise their voices.

The first step for stronger, more empathetic churches is to break out of our intellectual, theological and sociological cul-de-sacs. It is a lot of work not to standardize and prescribe my perspective for everyone. I tend to think I’m pretty objective, but my objectivity is colored by my limited experience and understanding. It’s time for churches in America to provide room for more voices.

We must decide to quit only looking to people like ourselves to define the experiences of people who are different. We must go to the source. Read widely and deeply from people with different perspectives and experiences. Share what you learn.

And remember, our war isn’t against people. It’s against principalities and powers—including those systemic powers holding others back.